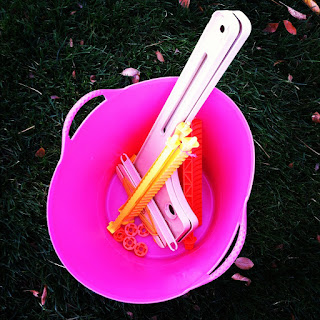 When I was eight or nine years old I received a Fisher Price Loom as a gift. I spent many hours that winter weaving purses, bags, and placemats with it. It must have been packed away when I was in middle school, and I forgot all about it until 20 years later. I called my mom one day and said, "I wish I had kept that loom, it was such a cool toy and I think our daughter would love it." I was sure I had taken it to the Goodwill when I was preparing to move to Colorado. 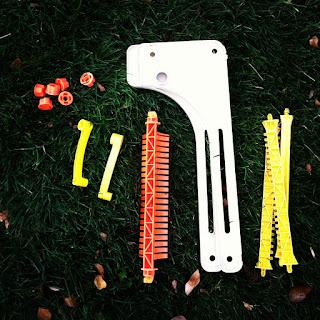 About I week later, I received a box from my parents. The loom! They found it in a box in the attic, and all of the pieces were there. A few of my readers have written to ask how to set up this loom, so I thought I would share a little photo tutorial with you. If you have this loom, you should have: 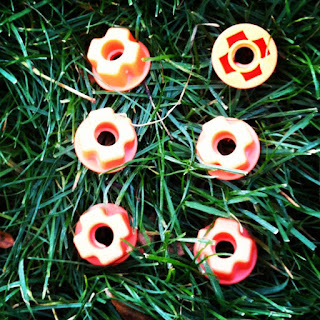 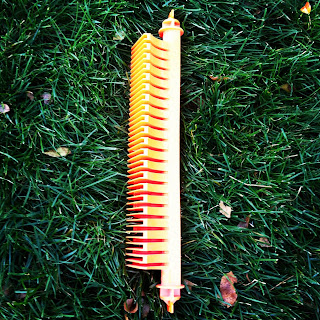 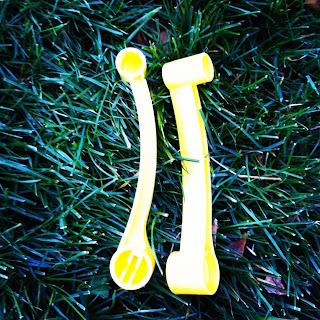 4. Two cross bars with letters, one without letters 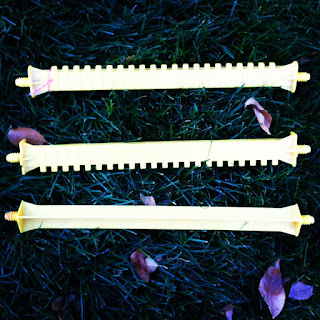 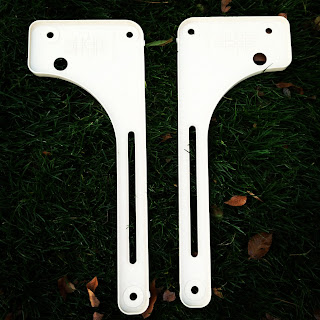 Okay, here we go!
First, look at the inside of the side panels and locate the L and R for left and right sides. There are corresponding letters, and L and R on the heddle so you know which way the heddle goes. 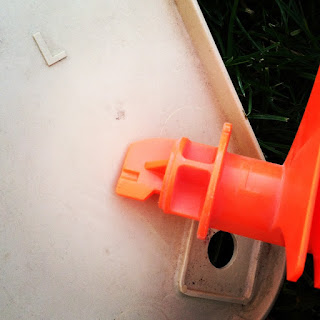 The heddle goes between the panels into the circular opening. 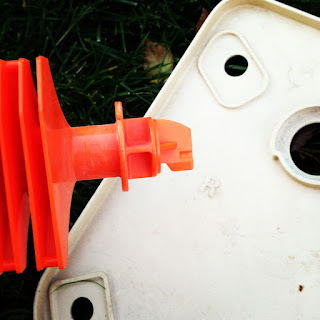 Locate the levers, they are also conveniently labeled L and R. 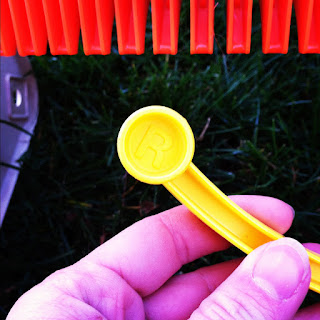 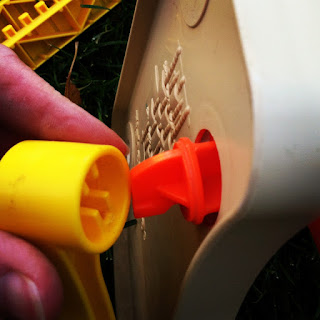 Repeat this for the other side, the lever secures the heddle and is used to move it up and down. 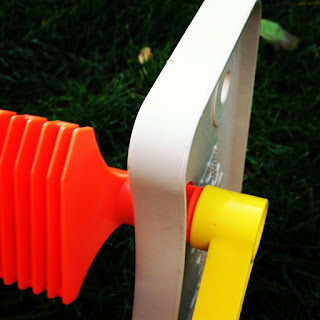 Find the cross bar without the letters and secure it between the side panels below and behind the heddle. It goes into the opening that is square. 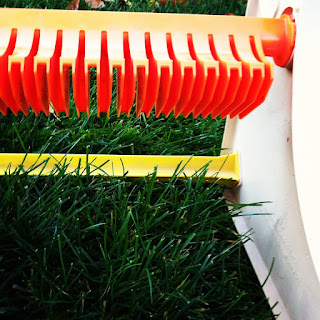 Use one nut on each side to tighten the cross bar. Find the cross bar that has the teeth on the bottom and ends on the letter V. 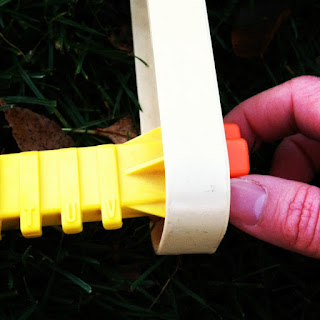 This bar needs to go between the panels at the front of the looom. Secure with a nut at each end. 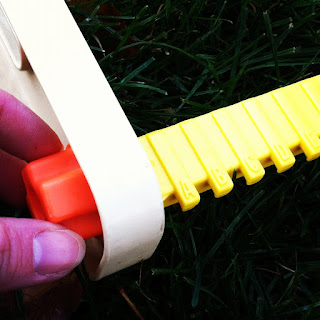 The last cross bar has teeth on the top and ends with the letter U. When securing the top cross bar, be sure the heddle is properly placed between the panels. The levers should raise the heddle up and down as shown in the photos below. 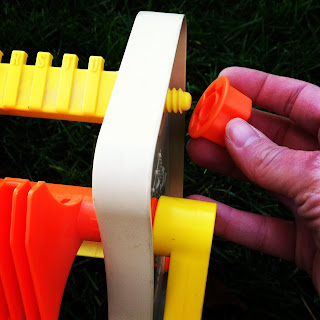 Secure the top cross bar with a nut at each end. 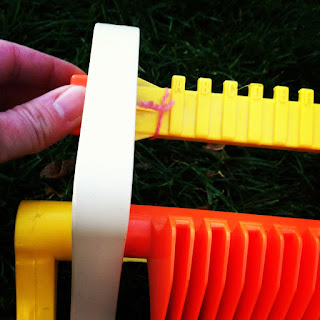 You are all done- your loom is set up! 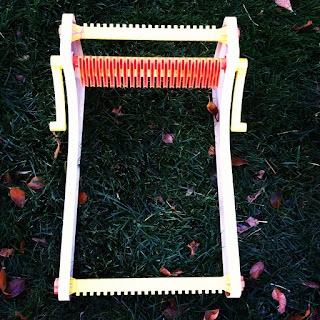 This is what it should look like when the lever and heddle are in the down position. 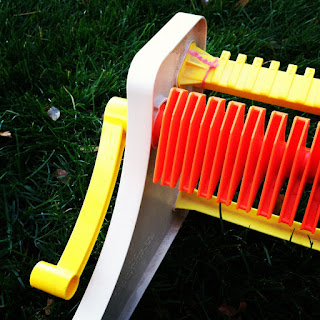 This is what it should look like when the lever and heddle are in the up position. 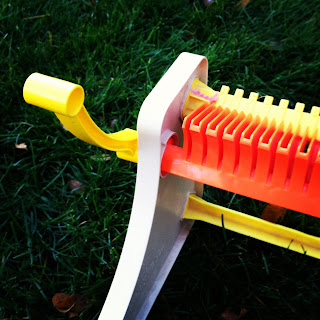 Begin weaving by securing your warp at the front of the loom. To warp, simply wrap the warp around a "lettered tooth" at each pass. 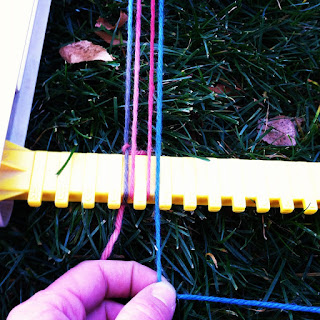 When you get to the top of the loom, you will approach the matching letter at the top cross bar, and alternate as you warp up and down between the top and slot of the heddle. It sounds confusing, but once you do it you will see how simple and intuitive this step is. You can make the warp as wide or narrow as you wish. 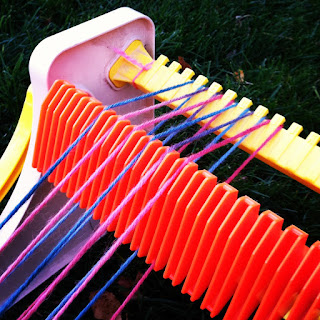 It is my experience that the shuttle and the comb are the easiest parts to lose from this loom. These are the ones that come with the loom: 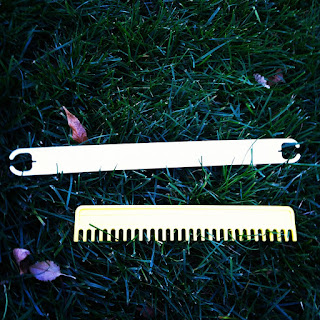 If you lose your shuttle, you can simply use another one, like this one from Schacht. 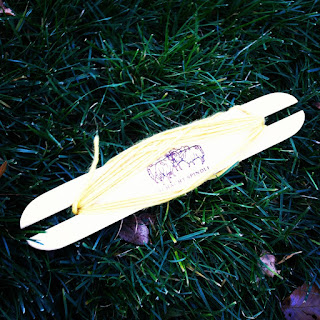 Once you warp the loom and get your shuttles ready, you can start weaving! 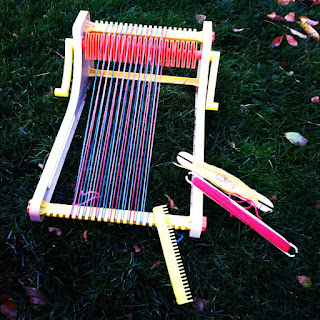 Lift and lower the lever between each pass of the shuttle. 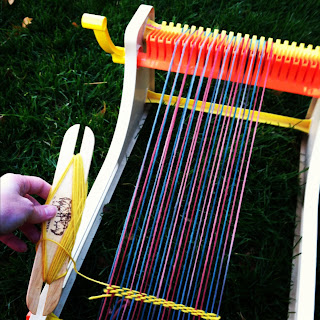 You will fall into a rhythm within a few passes. 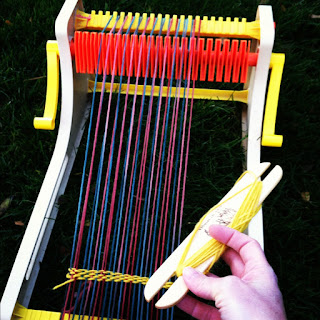 Fun, isn't it? I think they should re-issue the Fisher Price Loom. I am so glad I didn't give it away after all! 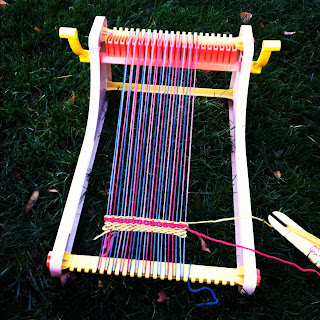 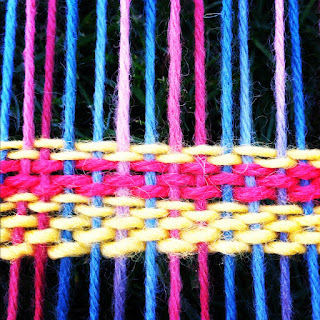